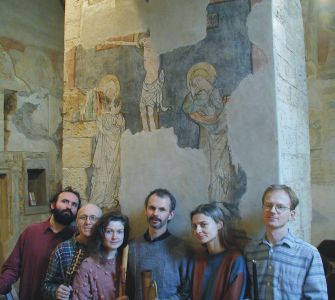 "Ritornello" means something like a retrain sung by all those round the table. It has an important function in Baroque music, allowing the vocal and instrumental parts to exist separately; the melodies were brief and easily learnt, thus encouraging the public to join the performers, to take part themselves. The solemnity with which "early music" is of-ten performed turns what was entertainment into a serious formal occasion. We have tried to show at what level this music is indeed "serious", by seeking the original intention of the composer, the original manner of performance, and by our interpretation to reveal the hidden world of the educated upper class of that time.

"Ritornello" is a loose ensemble of musicians who have been playing together for some time, and as soloists in other groups: players are invited according to the demands of the compositions under study, chosen from little-known seventeenth century music. Seeking their own well-funded interpretation, Ritornello dares to go to the limits of "light" genres, following historical sources and practice. A prime mover in the musicians' work together is the pleasure of music-making in itself. This aspect of music is embodied in the main theme of the Czech Lute: pleasure in the harmony of the different parts is like the joy of being part of a harmonious society: there is no need to know the whole score in order to play one's own part, in life, and in our search for our true calling in this world.